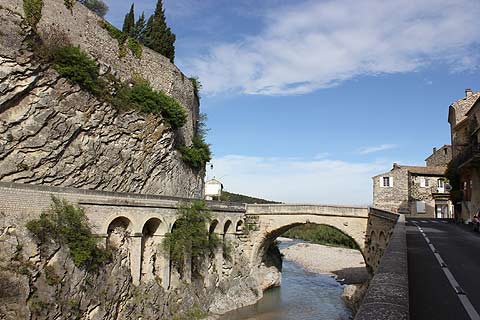 I had never heard of Vaison-la-Romaine until recently but it is a wonderful town. It has a medieval centre perched on top of a hill overlooking the modern town of which lies along the River Ouveze.

This would be enough to be worth a visit but sat just behind the main market square in the new town are two huge Roman sites – the Puymin Roman Site and the Villasse Roman site. Together they are one of the largest Gallo-Roman sites in Europe. 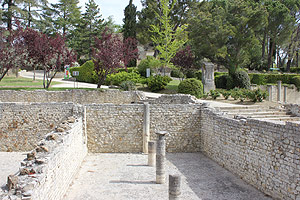 The Puymin Roman Site covers a large area and slopes gently uphill to the Roman Theatre which once held crowds of 6000 people. It has been largely restored and is the site of various concerts in summer months.

Walking through the Puymin site there are paved roads, the ruins of various houses, and a good selection of columns and statues. Various important houses can be seen including the ‘Apollon Lauré house’, a large house with private baths and lavatories and the ‘Maison à la Tonnelle’ on three levels.

Also on the site is the Théo Desplans Archeological Museum which contains many of the items found during the excavation of the two sites. 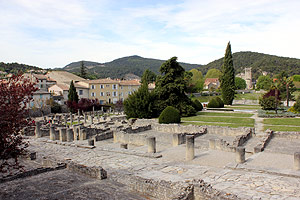 On the other side of the road from the Puymin Site is the Villasse Roman Site with its colonnaded shopping street and public baths.

On this site are some very large town houses, this was obviously a wealthy neighbourhood in Roman times.

The ‘Maison du Buste’ en Argent has a surface area of 5000 square meters. The silver bust after which it is named can be seen in the Theo Desplans Museum.

Also on the site is the  ‘Maison du Dauphin’ which shows the transformation of a small dwelling into a large town house.

Much of the Roman Sites can be seen from the roads next to the sites but they are really exceptional and worth the entrance fee to get a closer look.

The cathedral which dates back to the 11th century is next to the Villasse Roman Site. It has a pleasant cloister with a small garden in the centre. 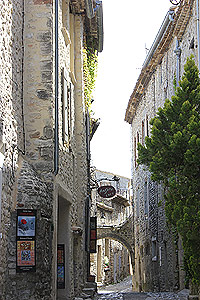 The old town is entered by the bell tower and its narrow streets wind uphill toward the castle at the top of the hill.

The old town was originally defended by this castle and the double defensive wall which can be crossed through two old gateways, the ‘Vieille Porte’ and ‘La Porte Neuve’ (the old and new gates).

The church has a small square in front of it from which you can get splendid views of the river and of Mount Ventoux.

As you wander the narrow, paved streets you can admire the beautiful stone houses  and terracotta rooves. There are lots of interesting architectural features to admire. Strolling around is a pleasure.

This old stone bridge was built at the end of the first century AD. It is a classified historic monument and links the town centre and the medieval old town.

Vaison-La-Romain had a disastrous flood in 1992 which swept away the new bridge and several houses and killed more than 30 people. Amazingly the Roman Bridge withstood the flood and is still in use today.