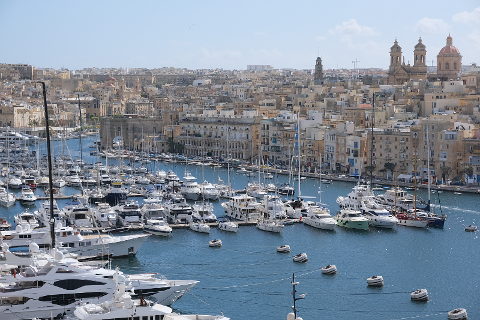 From Valletta looking south to the other side of the Grand Harbour you can see the three outcrops of land covered in buildings which make up the area known as the Three Cities and which is comprised of Birgu, Senglea and Cospicua. Together these make for a very enjoyable day trip from Valletta to explore their ancient heritage.

Europe This Way comment: Our ferry ride from the Valletta waterfront to the ferry terminus on Senglea with the historic buildings of Birgu on one side of the water and Senglea on the other as we rode amongst the colourful, traditional Maltese boats and the luxury yachts was a highlight of our Malta trip.

The Three Cities are made up of Birgu, Senglea and Cospicua and were enclosed by a powerful line of defense known as the Cottonera lines and consisting of huge defensive walls, forts and towers built to defend the Grand Harbour of Malta from attack. The fortifications were created by the knights of Saint John in the 16 and 17th centuries. 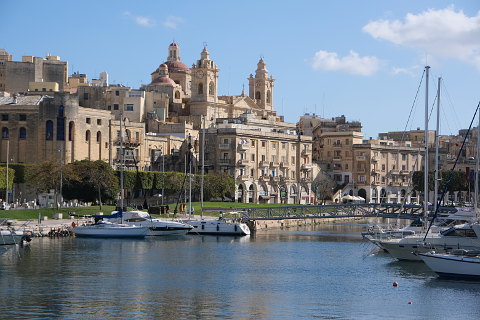 The oldest of the three cities and the most popular is Birgu and the walk along its waterfront area full of beautiful stone buildings many of which have cafes and restaurants where you can sit and admire the fine yachts and views of the beautiful town of Senglea on the other side of the water.

At the end of the waterfront path is the beautifully restored Fort Saint Angelo. This existed before the Knights of Saint John but when they settled in Malta after being thrown out of Rhodes they chose the Grand Harbour area as their home and particularly Birgu where they improved the Fort Saint Angelo, built many churches, palaces, warehouses and built the Cottonera line defenses.

The fort can be visited and is recommended both to enjoy the scale and history of the fort itself but also for the splendid views you get of Senglea to one side, Cospicua to the other, the buildings of Birgu behind the fort and the magnificent vista of Valletta ahead on the other side of the harbour. Fabulous views in every direction!

You can even see the unusual 'plaited' columns of Fort Ricasoli beyond Cospicua, which were used in the filming of the first season of Game of Thrones as the gatehouse of 'Kings Gate'.

Also to visit in Birgu is the Inquisitors Palace, which can be visited on a combined ticket with the Saint Angelo fort, the Maritime Museum and Malta at War Museum. The Church of Saint Lawrence is another highlight and is Baroque in style.

Each 'city' is the size of a small town and is quite hilly. Climbing the steps and discovering the narrow streets and open squares is part of the pleasure of a visit to the Three Cities as well as exploring their waterside areas. Victory Square in Birgu has particularly nice architecture and colourful balconies and shutters.

Another way to explore the Three Cities is by boat. A boat trip around the Three Cities in one of the traditional Maltese boats is very reasonably priced and allows you to get close to Cospicua if you haven't the time to walk round. 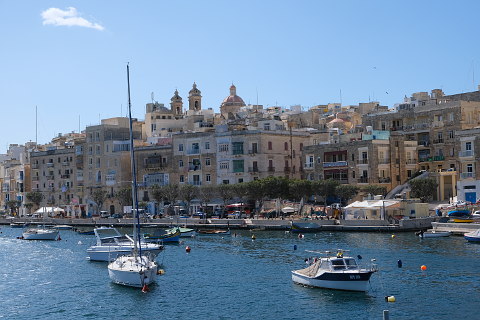 The easiest way to get to the Three Cities from Valletta is to go by ferry. The ferries leave every half an hour and the ferry stop can be found at the bottom of the lift from the Upper Barrakka gardens. The price of the ascent in the lift is included in the ferry price.

The ferry costs just a couple of euros with a small reduction if you buy a return ticket. Rather than buy a return you could go one way on one of the traditional maltese boats which also only cost a couple of euros. It is possible to go by bus but who would want to miss the beautiful trip through the harbour by boat surrounded by all the beautiful buildings and boats.