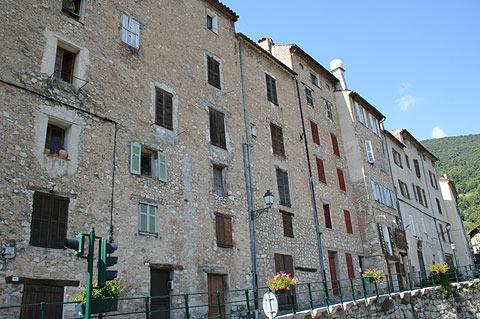 The region known as the ‘Pays de Fayence’ is found in Provence, to the east of Grasse and to the north of Saint-Raphael (a coastal resort on the Cote d’Azur).

A very attractive region, set in countryside where the mountains start to rise behind the flatter coastal region, the landscape is mixed, with woodlands and olive groves separated by large areas of wildderness with craggy outcrops of rock and steep cliffs lining valleys through which streams flow. 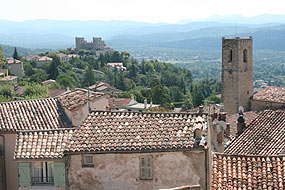 The landscape is key to the architecture of the region, because it is best known for its so-called ‘perched villages’ – small medieval villages built on the high rock promontories with views that extend for many miles across the countryside and out across the Mediterranean.

Originally these locations were chosen for their defensive capabilities – now of course they are better known as tourist destinations.

The Pays de Fayence (translated: Fayence country) contains eight of these villages, and each has its own particular charm and characteristics. The villages are: Mons, Fayence, Seillans, Tourrettes, Callian, Montauroux, Tanneron and Saint-Paul-en Foret.

Some of the most notable highlights include:

Mons, the most northern of the villages, is also in the most ‘barren’ landscape. It is a very attractive village strung out along its rocky promontory – you can still see the remains of the castle that once defended the spot at one end of the village. At the other end of Mons there are exceptionally far-reaching views from the belvedere: the village is at an altitude of over 800 metres and you can see right out to sea, as far as corsica on a clear day.

Fayence itself is the largest of the villages. Among its many highlights and historical features (the traditional village wash-house and bakery among them) be sure to reach the top of the village where the clocktower stands – it is surrounded by a viewing platform which gives views in almost all directions. 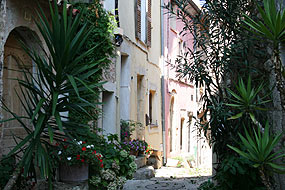 Seillans is the only one of the villages listed to also be classified as a ‘most beautiful village in France’. It’s narrow steep streets are a pleasure to explore (if a bit wearying!) and also has the remains of the original castle at the top of the hill.

In the centre of the region, close neighbours Callian and Montauroux are just a couple of kilometres apart. In Callian particularly you can lose yourself in the narrow alleys which wind around the hillside and are lined with medieval houses, while Montauroux is centred around an open village square and streets leading up the hill to a picturesque little chapel (and of course the inevitable views…)

Overall if you are visiting the eastern part of the Var department it is highly recommended that you spend time exploring the perched villages of the Pays de Fayence. There is something new and interesting to see in each of them and they provide a fascinating glimpse into what provencal village life might have been like hundreds of years ago.

Photos show Fayence rooftops and a street in Montauroux.