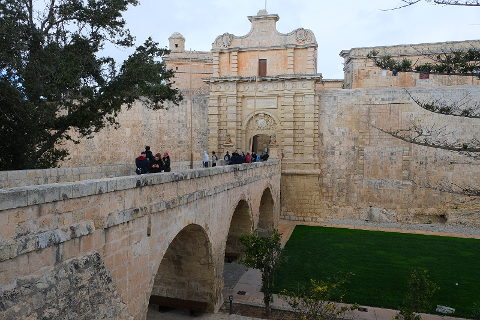 Mdina is a small town with a hilltop location inland in Malta and it is surrounded by impressive defensive walls. Mdina is an easy half hour bus ride from Valletta, the capital city of Malta. Mdina is also called the 'Silent City' or the 'Noble City'.

The first glimpse of Mdina on top of a hill surrounded by its fortified walls is superb. It has the timeless feel to it and as you approach the main gate and the bridge over the gardens that once were a moat you can understand its strategic importance.

Those of you who are Game of Thrones fans witll recognise the bridge and gateway from series one where the impressive gateway was used as the entrance to Kings Landing. Inside Mdina one of the buildings was used for filming the exterior of Littlefingers brothel. 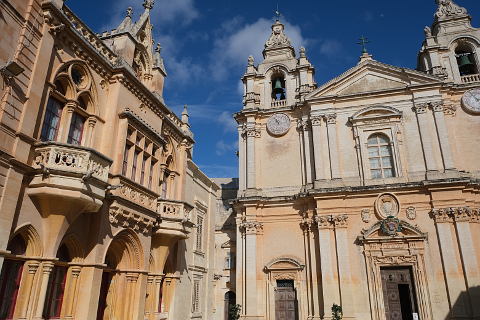 Once through the gates the first building you come to is the beautiful Vilhena Palace which is home to the Natural History museum.

The Mdina dungeons are also by here and opposite Vilhena Palace is the imposing Torre dello Standardo which was one of the watchtowers of Malta. These were errected across the island and warnings passed on by lighting a fire on the roof top. It is now home to the tourist office where you can pick up a map showing the main places of interest in Mdina.

From here the path leads to the main square which is surrounded by a number of beautiful buildings including the Baroque cathedral. The cathedral was founded in the 12th century but rebuilt in Baroque style following the 1693 earthquake.

One of the buildings next to the Cathedral is the Archbishop's Palace which was built in 1722.

On the way to the Cathedral square you will have noticed the Cathedral Museum whose doorway is flanked by two stone figures apparently holding up the stone work. This building is also in Baroque style. The Cathedral Museum was originally built as a Seminary but is now a museum of religious art and artefacts and includes documents from the Inquisition.

There are a number of impressive palaces to admire in Mdina. Amongst the main ones are Palazzo De Piro which is near the Cathedral. Palazzo Falson, which is also known as the Norman House, is a beautifully preserved building from the Norman era and was once occupied by the first Grand Master of Malta. Near to hear is an excellent viewpoint over the surrounding countryside.

The Palazzo Gatto Murina is one of the earliest of the Siculo-Norman buildings and inside you can watch a film about Mdina and its history. 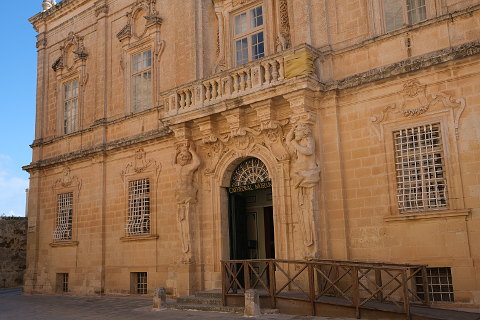 No cars are allowed in the city which is why it is known as the 'Silent City'. It makes it a pleasure for walking round and exploring.

The neighbouring town of Rabat is on the outside of the walls of Mdina and is pleasant for a stroll around. It is home to the Saint Paul's Catacombs and Saint Agatha's Catacombs.

A brief history of Mdina

Because of Mdina's strategic location it has been occupied since prehistoric times. It was a refuge in Bronze Age times and was settled by the Phoenicians in the 8th century BC. The Romans took over the city in 218 and it was quite a lot larger in those days.

Paul the Apostle is said to have been shipwrecked on Malta and taken to Medina where he cured the sick father of Publius, the govenor of the city. Publius converted to Christianity and became the first Bishop of Malta.

In the Middle Ages the size of the city was reduced to make it more defensible probably by the Byzantine empire who took over Mdina. The city was then besieged by an Arab dynasty. The siege took weeks or months and Mdina was finally conquered. The invaders massacred the citizens and destroyed the city.

Malta then remained almost uninhabited until 1048/49 when it was resettled by an Arab community who rebuilt Mdina. It was at this time that it became known as Mdina and not Melite, its previous name.

In 1091 the city was under siege again and was captured by Roger I of Sicily and Malta was icorporated into the kingdom of Sicily. When the Order of Saint John took over Malta in 1530 the keys of the city were handed to the Grand Master Phillipe Villiers de L'Isle-Adam but the order settled in Birgu (one of the Three Cities) and Mdina lost its capital city status.

In the 1540s the fortifications of Mdina were upgraded and during the 'Great Seige of Malta' in 1565 Mdina was the base of the cavalry of the Order. The cavalry played a decisive part in defeating the Ottomans.

Fortifications were again upgraded in the 17th century but Mdina suffered severe damage in the 1693 earthquake which caused heavy damage in nearby Sicily too. The Cathedral of Saint Paul was damaged and was rebuilt in Baroque style.

In 1722 Mdina was much restored and and renovated and as the work was given to a French architect most of the renovations were carried out in French Baroque style (Baroque being the architectural trend of the time). Large parts of the fortifications were also rebuilt and the new Mdina gate was built.

In 1798 Malta was captured by the French but there was a two  year uprising and eventually the Maltese rebels succeeded and the French surrendered. Malta became a British protectorate in 1800.