Perhaps it is less well known for its larger towns, but a trip that is based around visits to the three principal historic towns - Sarlat, Bergerac and Perigueux - will introduce you to a different, and equally interesting, aspect of the region. Each of these three towns has a great deal to offer visitors, with each having a very individual character in its historical centre.

Each of the three is in a different part of the Dordogne: Sarlat to the south-east, Bergerac to the south-west, and Perigueux towards the north. Together they form a 'triangle' with about one - one and a half hours drive between any two of them. Ideally a visit that is designed to include all three will allow at least two weeks so that you have a few days to explore the surrounding regions as well!

Sarlat would be generally agreed as having the most extensive historical centre of the three and the most buildings and sights of interest. It is a quite remarkable town with numerous medieval and renaissance houses and buildings, many built in the famous yellow stone of the region. 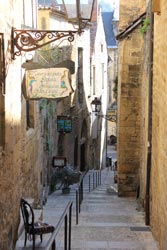 Allow at least a full day to explore Sarlat. We highly recommend you first visit the Tourist Information Office to get a map showing all the highlights, otherwise you will miss many of them s you stroll through the streets.

The centre of Sarlat was the first town in France to be listed as a 'secteur sauvegardé' - that is, protected from development in order to preserve its historic importance - and is perhaps the most impressive medieval town in France.

You can easily spend a day or more exploring the centre of Sarlat, with numerous alleys and side roads to explore around the principal Rue de la Republique, often opening on to small squares with cafes to tempt you to stop a while.

Visitors often associate Bergerac either with its airport, as a point of arrival in the Dordogne, or with Cyrano de Bergerac. This is to miss the main appeal of the town! 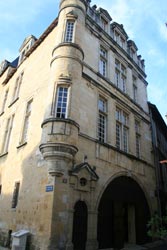 Bergerac is on the banks of the Dordogne river, which is crossed in the town centre by two bridges.

The historic centre extends northwards from the riverside quai and is a fascinating area with many half-timbered houses to admire, and a warren of narrow streets as well as two principal squares, one of which contains several restaurants.

While the statue of Cyrano de Bergerac in the main square in the old town is certainly the most photographed in the town, you should know that Cyrano almost certainly never actually visited the town!

Continuing north in the town centre past the market hall you can explore lots of pedestrianised shopping streets and more cafes. The town has made a great effort in restoring and improving the centre in recent years and it is one of our favourite Dordogne towns.

You can take a boat trip along the Dordogne river from the quai next to the old bridge, or another (cheaper!) way to enjoy the riverside views is to follow the path downstream along the northern bank of the river.

North-east of Bergerac, Perigueux is the least visited of the three towns we are introducing here but we highly recommend you find the time to explore! The first important site that you will see even as you approach the town is the remarkable byzantine style cathedral.

There are numerous cathedrals across France, and the country is especially well known for the gothic style cathedrals in the cities to the north, but the cathedral (strictly speaking it is no longer a cathedral) at Perigueux is completely different, with an architecture that shares more with eastern Asia.

The historic centre is in the area around the cathedral and shares many characteristics with Bergerac, with shady open squares joined by pretty streets and many houses with interesting architectural features.

When you are planning your visit to the Dordogne based around you will need to give some thought to how much time to allocate to each part of the visit.

As a guide, first time visitors will typically want to spend more time near Sarlat which has many of the most famous sites, especially picturesque villages and medieval castles, close to hand. These include the villages of Domme and La Roque-Gageac and the castles at Beynac and Castelnaud, among others.

Perigueux and the north of the Dordogne has less 'major' attractions but this is compensated for by quiter roads and some of the most lovely scenery in the department, with wooded valleys and quiet traditional villages to explore. The riverside town at Brantome and the pretty village of Bourdeilles are unmissable local highlights.

If you are arriving or leaving via Bergerac airport that is the perfect time to incorporate a couple of days in the town. Among places of interest in the region are the medieval village of Issigeac to the south (visit on a Sunday morning to enjoy the popular market) and the bastide town of Eymet.

About an hour drive west from Bergerac the small towm of Saint-Emilion is world famous for its vineyards and also very beautiful, and a listed World Heritage Site.