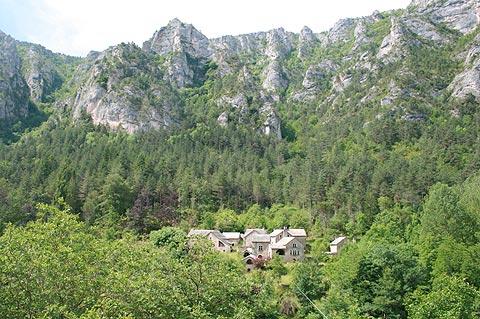 Head inland from the Languedoc coast, and north into the Lozere department, and you will find one of France’s scenic highlights at the Gorges du Tarn. The gorges run for some 40 kilometres along the course of the Tarn River, starting west of Florac finishing near Les Vignes.

There is a road that follows along the bottom of the gorge offering some very impressive scenery and a sprinkling of villages to discover en route.

You might not realise as you travel through the cliff-lined valley but these are the deepest gorges to be found in Europe – they don’t ‘feel’ as big as the Gorges du Verdon further east in France for example.

Allow plenty of time for the journey because you will find yourself pulling to the edge of the road to stop and admire the scenery every time you go round a corner! High cliffs soar above you on either side with trees clinging on wherever possible, and the river always just below – its quiet flow gives little indication how it has carved such deep gorges over the millions of years.

Among the most important villages to visit in the gorges is Sainte-Enimie. This is a very attractive village spread out along the riverfront with cafes and shops, while sprawling up the steep hill behind is an extensive medieval village (also categorised as a ‘most beautiful village in France’).

Several other villages and hamlets will also catch your attention. Castelbouc, at the east of the gorges, is a mere cluster of houses on the valley bottom but is one of the most picturesque hamlets you will find. To the western end tiny hamlets such as Hauterives are visible on the other side of the river – but you can only reach them on foot or boat, not by car.

When you have emerged from the canyons it is also highly recommended that you visit the Point Sublime – an alternative view of the Gorges du Tarn, on the northern rim. Head towards Saint-Georges-de-Levejac, to the north of Le Rosier. The Point Sublime is at least 15km from the bottom of the gorges but well worth the time and effort.

See france this way for more places to visit in the Gorges du Tarn and some photos – although as so often with great scenic highlights, photos fail to do justice to the reality!