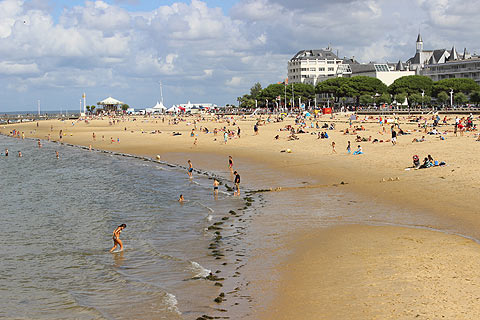 What makes Arcachon so special?

There are more than 3000 kilometres of coast in France, much of it beaches. There are also hundreds of resorts around the coast, including many that are very well known - especially along the Riviera. So we have a challenge on our hands to convince you that Arcachon, on the Atlantic Coast in south-west France, is a better place to visit than all the rest!

Note, our goal here isn't to explain every highlight or place of interest in Arcachon, but to convince you to visit so that you can see for yourself!

To make things harder for us, whie resorts such as Nice and Cannes are famous around the world, by comparison Arcachon is little known outside France and walking around the town you will hear the French language spoken everywhere with English only heard very occasionally. There are lots of reasons why we highly recommend Arcachon as a destination. The importance you give each of these will depend on your personal preferences, but among the most important are:

1) The beaches. OK so a lot of the Atlantic Coast has great beaches (the beaches are far less crowded and sandier than the Riviera, less windy than those in Languedoc) but those in and around Arcachon are among the best and the most accessible, and because the beaches face the protected bay called the Bassin d'Arcachon they escape the 'enthusiastc' waves if the Atlantic. 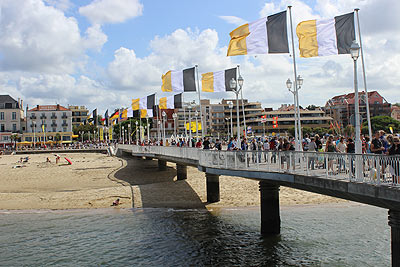 Several beaches are available, with the most popular being those in the town centre, and those a little to the west called Pereire and Moulleau. 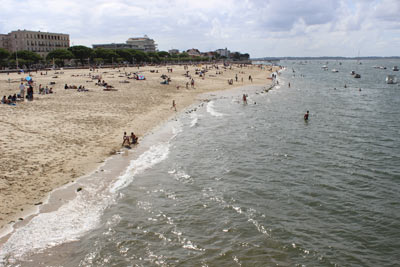 2) The town centre is nicely maintained, clean and lively, and has numerous bars and restaurants, upmarket shops and ice-cram parlours to choose from as well as all usual facilities (supermarkets etc). It is busy but never overwhelmingly busy so you know that you are somewhere lively without taking hours to move anywhere along the streets!

There is a good choice of restaurants, with 'cheap and cheerful' moules-frites or pizza cafes, as well as a good selection of better quality restaurants, and many of them are good value, which isn't always the case with restaurants in tourist destinations (although you should check before ordering!) 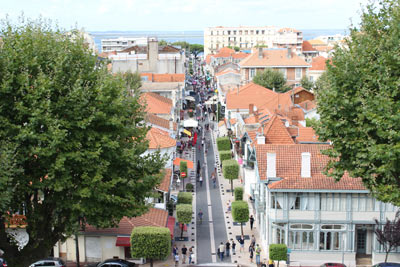 3) Just behind the town centre is the 'piece de resistance' of Arcachon - the Winter town, more correctly known as the Ville d'Hiver. Dating from the 1860's when Arcachon developed as a resort for the rich to come to in winter, you will find hundreds of magnificent belle-epoque villas hidden away in the quiet streets of the Ville d'Hiver, so don't forget to ask for a guide in Arcachon Tourist Office before you start exploring. 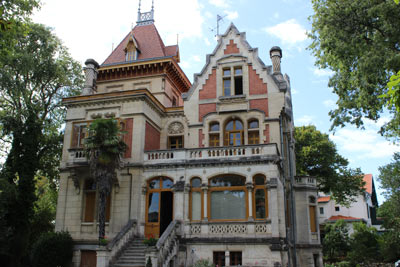 I don't believe that you will find anywhere in France with this extensive and beautifully maintained architecture and highly recommend you escape from the beaches for a while to explore! Tourist trains and tour buses around the town centre, including the Ville d'Hiver, are also available if you prefer.

4) To the east of the town centre, beyond the famous 19th century casino, you can continue to explore with a stroll around the third largest pleasure port in France.

5) The extensive forests south of Arcachon offer numerous leisure possibilities from a gentle stroll to an action packed day at a treetop adventure park, and the lake a few kilometres south of the town is also the second biggest in France. So hire a bike and just set off exploring - you will find that many roads also have a completely separate 'bike road' so you can explore safely.

Sporty types will love the long, long promenade that follows the western coast south from Arcachon and continues south to Biscarrosse and beyond. This is extremely popular with walkers, joggers and cyclists, and in the summer you can also join one of the free Yoga or Tai Chi groups on the beach. Of course there is also a more 'normal' promenade just behind the beach in Arcachon centre.

6) The Dune de Pyla, a few kilometres south of Arcachon, is the biggest sand dune in Europe. Don't think that sounds very interesting? Climb to the top and look at the views across the forest and out to sea and you will change your mind. See your children running down the side of the dune and they will change their minds! You can also go hang-gliding off the top of the 110 metre high dune! 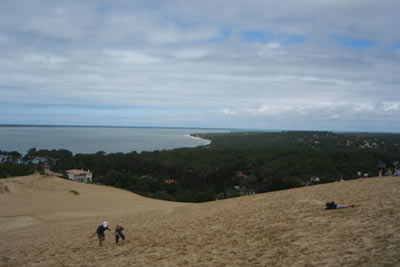 7) Also nearby, from Arcachon centre you can take a ferry across to Cap Ferret, an upmarket Atlantic promontory with some very picturesque traditional fishing villages. From the train station in the town centre you are only a 40 minute train ride from Bordeaux, one of the most beautiful cities in France.

8) Getting here and getting around. Last but not least, you can visit without needing a car. Because Arcachon has a train line you can get easily get here from Bordeaux airport and there is plenty to see and do without needing to drive for miles.

If you do have a car, the roads are usually much quieter than those along the Riviera, so you won't spend hours stuck in the traffic with a car full of stressed out children! (The only exception is the main road from Arcachon to Bordeaux which can get very busy, especially on Saturdays in summer!)

Not convinced? We are lucky in that we can live and work anywhere in France and have to travel around a lot, and have visited and stayed in almost every popular beach resort France has to offer, but have chosen to live in the Dordogne and have a holiday apartment in Arcachon. Still not convinced? Our neighbour in Arcachon lives in Nice for most of the year but comes to Arcachon for three months every summer to escape the crowds and hassle of the Riviera!