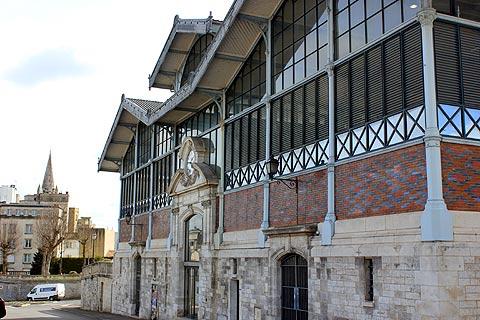 Angouleme is not a city on the normal tourist agenda but none-the-less does have an interesting historic centre and a couple of unusual events that take place each year.

Angouleme is home to the biggest annual comic festival in the world, the ‘Festival international de la Bande Dessinée’ and welcomes nearly 6000 people in the comic book industry and many thousands of visitors each year. The festival takes place each January and next year (2013) will celebrate its 40th birthday.

As well as prize giving ceremonies for best comic book etc. there are exhibitions, meetings and shows which take place over the course of a few days.

Another special event each year is the ‘Circuit des Remparts d’Angouleme’ which is a classic car race which takes place on the roads around the ramparts. The event takes place over 3 days each September and begins with a ‘Concourse d’elegance’ where all the cars parade giving you a chance to admire this superb collection of vintage cars. The next day is a tourist rally open to everyone with a pre-1975 car and the route winds through the local countryside with a stop for lunch. On the Sunday the big race takes place, an event which first took place in 1939.

If you are not able to visit for these events but are holidaying nearby then there is still plenty to see in Angouleme. 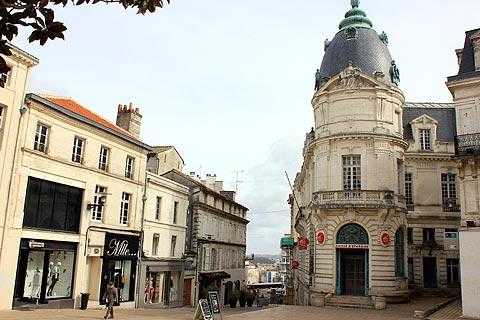 The historic centre is ringed by about 3km of ramparts and sits up above the newer town below. A walk round the ramparts offers great views of the town and countryside below. From here you can see the buildings of the old paper factories, now home to a paper museum ‘Le Nil’, on an island in the river and just next to it the comic strip museum, focus of the comic festival. Also on the edge of the river is a Contemporary Art museum.

The ramparts are also an excellent spot from which to enjoy the classic car race on the roads below.

Around the Town Hall

One of the most notable buildings in Angouleme is its town hall which is inside the old castle and count’s residence. It became the town hall in 1869. It looks different on every side and not only has a large polygonal tower which was built in the 13-14th century; it also has a round tower dating back to the 15th century. There is also an indoor courtyard.

The town hall faces the Place de l’Hotel de Ville on one side and the Place Bouillaud on the other.

On the other side of the Place de l’Hotel de Ville is the Hotel Saint Simon, one of Angouleme’s impressive mansions. This one was built in the 16th century and has a richly decorated Renaissance façade.

The 19th century Law Courts nearby is built in a neo-classical style. Also nearby is the Covered Market which was inspired by the covered markets in Paris. It was built in the 19th century and is made of iron and glass creating a pleasant airy structure. 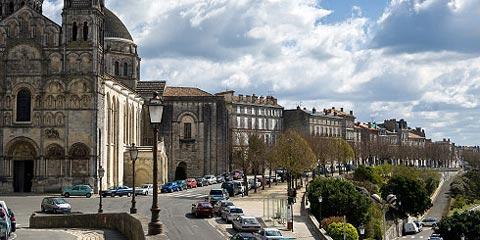 Saint Pierre’s cathedral has a beautiful round cupola, a lovely square tower and an amazing carved façade. It is one of the few Romanesque cathedrals in France (most are Gothic) though it has obviously been influenced by the returning crusaders from Constantinople and Eastern Europe.

Near to the Cathedral is the Museum of Angouleme which is housed in the former episcopal palace. It has collections of local Archeology and African art.

The cathedral sits on the edge of the historic centre next to the ramparts. 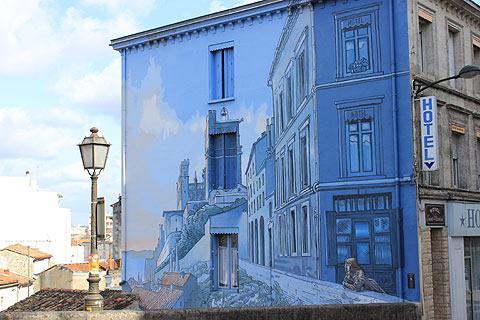 Spread out in the historic centre and beyond are 20 murals, a reflection of Angouleme’s position as capital of comic strips. These murals have been designed by major comic artists. One of them, ‘New York sur Charente’, stands 10 stories high on the side of an office block. The ‘La fille des Remparts’ in the photo is on one of the buildings on the ramparts and is a trompe l’oeil depicting the ramparts of Beziers where Max Cabanes, the artist, comes from – very clever.