Valletta is found about half way along the north-east coast of Malta. Malta itself is in the Mediterranean, between Italy to the north and Libya to the south. Valletta is the capital of the island - the smallest capital in Europe, having a mere 7,500 residents.

Locally Valletta is known as 'Il Belt' - the city. It is also Malta's main port, due to its being a long peninsula (called Sceberras Peninsula) between two natural harbours - Grand Harbour and Marsamxett.

The city is best known for its setting and its architectural beauty and interest - perhaps above all for its splendid palaces and churches - and sufficient that the city is now a listed UNESCO world heritage site. It will perhaps remind you of Venice a little - a place of great beauty with narrow passages and side streets leading you into a slightly different and unexpected world, of a grandeur gone by - this is a good thing and part of the charm of Valletta!

Much of the architecture dates from the years following the foundation of the town by the Knights of St John in 1566 (following the siege of Malta by the Ottoman Turks the year before), although there are also substantial later additions and modifications.

Valletta suffered quite badly during World War II during sieges by the Italians and Germans and among the buildings lost was the (apparently very impressive) Royal Opera House, but the level of evident damage is surprisingly small.

Because the town is squeezed a thin, often steep, peninsula you are advised not to explore with your car. Rather, leave your car at Floriana just outside Valletta and then travel around the city on foot or by bus. 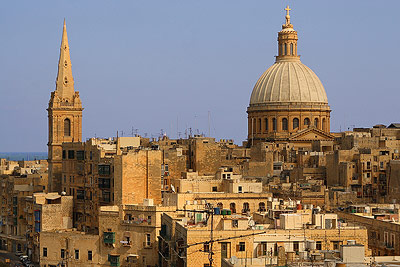 Main highlights and places to see in Valletta

The main street in Valletta, the Republic Street, runs much of the length of the town and will be your starting point for exploring, and later on for shopping perhaps.

Grand Masters Palace - now home to the country's parliament so not always open to the public.

Co-Cathedral of St John and Caravaggio's painting 'Beheading of Saint John the Baptist' in the cathedral museum. The cathedral itself - rather uninteresting from the outside - has an impressive sequence of chapels and painted frescoes in the highly ornate interior. The highly decorated tombs of the knights are also set in the floor of the cathedral.

Churches of Valletta - more than 20 are to be found in this small city. Too numerous to list here, the highlights include Our Lady of Victories Church (the first building completed in Valletta); the Carmelite Church and the 19th century Saint Pauls Anglican Cathedral.